Need some help? Use our Memory Configurator 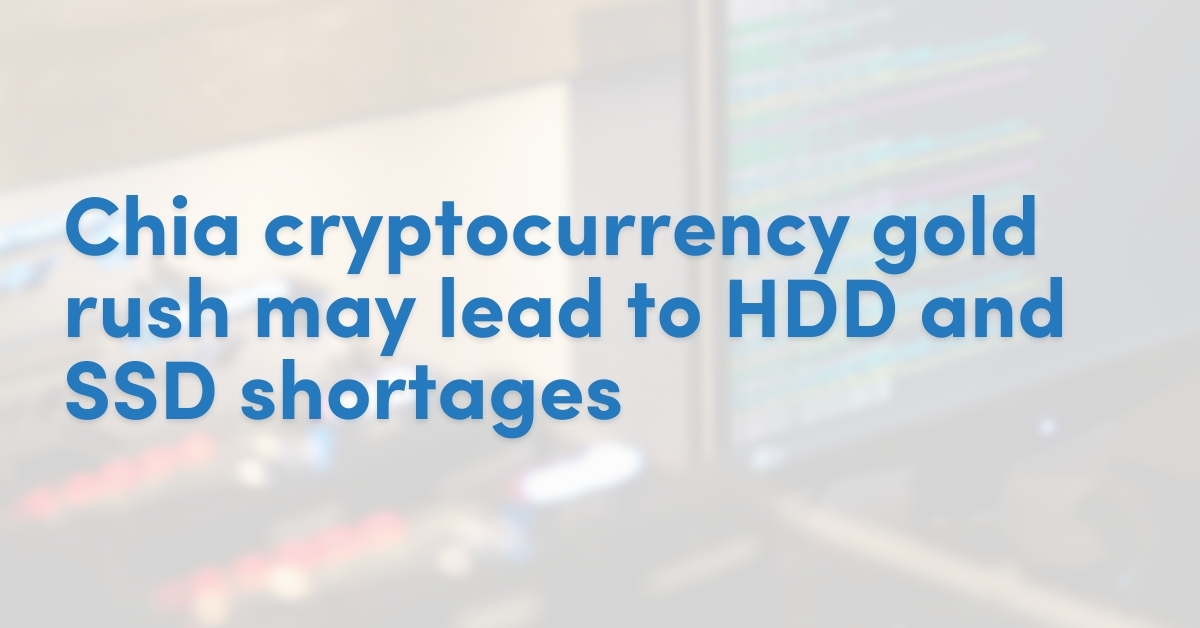 You’ve probably heard a lot about cryptocurrency over the past few years, and you may have even bought some yourself. Now, cryptocurrency has become embroiled in the component shortage crisis, which continues to cause problems globally.

A new cryptocurrency, Chia, is expected to cause HDD and SSD shortages in the coming weeks and months. According to the company headed by BitTorrent creator Bram Cohen, users of Chia blockchain will “seed” unused space on their HDD or their SSD by installing software that stores a collection of cryptographic numbers on the disk as “plots”. Using Chia software, users scan the blocks to see what hash is closest to the cryptographic challenge and then pass the result off to a separate server, known as a “timelord.” You can learn more about the process in more depth here. In the simplest terms possible, Chia relies on storage rather than processing performance to mine. Using storage instead of processing performance has several advantages, including reducing electricity wastage in the mining process. For this reason, some have touted Chia as the ‘eco-friendly cryptocurrency’.

How will Chia cause component shortages?

Chia will start trading on 3rd May, and in preparation, miners in China are purchasing as many HDDs and SSDs as possible. For this reason, 4TB to 18TB drives are now in high demand. The sudden jump in demand will undoubtedly have an impact on prices until suppliers can react accordingly. This is a worrying development as the pandemic has increased demand significantly, and suppliers are struggling to keep up.

In recent weeks, Nvidia’s CFO Colette Kress explained that the company expects demand to “continue to exceed supply for much of this year”. Similarly, chip manufacturer TSMC, who makes processors for Apple, Qualcomm and AMD, has warned that shortages could continue into 2022. When it comes to cryptocurrency, enthusiasts have caused supply problems in the past. Earlier this year, Nvidia said it will deliberately reduce the efficiency of its latest card by 50% when it is used to mine Ethereum, a cryptocurrency growing in popularity.

Jiahe Jinwei, one of the biggest domestic manufacturers in China, said that the company’s high-performance 1TB and 2TB NVMe M.2 SSDs are sold out. The company also plans to put restrictions in place to stop over-enthusiastic miners from buying large stocks of SSDs. Ahead of Chia’s launch, HDD prices have increased by as much as 67 per cent in China. However, it isn’t only the Chinese market feeling the effects. A growing number of regions around the globe are experiencing HDD and SSD shortages. As a result, manufacturers are looking to increase production to try and meet demand as quickly as possible.

Looking for high-performance HDDs and SSDs? We can help you

Looking for high-performance HDDs and SSDs? We can help you despite growing shortages, we want to assure our current and prospective customers that we have sufficient stock, enabling us to continue supplying our products without interruption.

At Origin Storage, we pride ourselves on our multifaceted offering: affordable, high-quality, and compatible components that last. If you would like to purchase our high-performance HDDs and SSDs, please get in touch with us, and a member of our team will be happy to assist you.